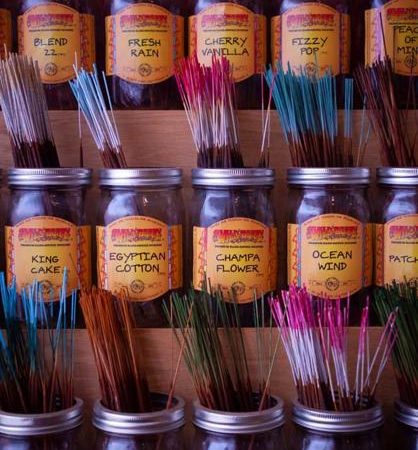 We’re getting a lot of feedback that their animals are actually acting normal again,” Ellis said. Steamtrain also carries Kratom products, something that Ellis says is useful for helping people …

Combining the notion of an occupational trade with the fact that The Dalles is a railroad town, owner Richard Ellis came up with the name Steamtrain Glass for his smoke shop, now located at 410 ½ East Second Street.

“I was originally a pipe steam-fitter, and I knew The Dalles had a long history of railroading,” Ellis explained.

A framed 1916 certificate for the Order of Railway Conductors, the original railroad conductor’s union, is part of the decor for the shop, which carries glass smoking accessories, hemp t-shirts, incense, CBD products (cannabidiol, one of the active chemicals in cannabis) and Kratom (a tropical plant product that some claim treats pain, causes mild stimulation and helps prevent withdrawal from opiates.)*

Ellis and his wife, Wena, opened Steamtrain in The Dalles last September. Previous experiences in selling glassware wholesale to dispensaries in the Seattle area out of the trunk of their car eventually gave the couple the idea to try the retail side of business.

“We’ve been up in the Goldendale area for twenty some years. We came out of Portland, and were tired of the corporate life, the traffic and the crime. We figured there was an opportunity here in The Dalles, we’ve seen it grow a little bit. We had some backing and support for this, that is what brought us down here,” Ellis said.

Ellis also said that his previous work in midwest oil fields and doing military contract work in both Desert Storm campaigns contributed to his welcoming the decision to pursue a quieter retail job.

“I did engine room work for the Navy, “sleeping ships” are what we called them. We got them ready for the war over there. I did about eight years. It’s pretty tough work, it’s pretty tough on a guy. I was leaving home for six to eight months at a time, which is not much of a family life,” Ellis said.

Unfortunately, partly due to months of harsh working conditions in the oil fields in North Dakota, Ellis suffered a back injury that required surgery. He’s mostly recovered now, and he says the experience opened his eyes to the options of available pain remedies, including CBD products, some of which he now carries at Steamtrain.

But what really got Ellis interested in opening the shop was the loss of several family members to cancer.

“What pushed us the hardest was that we had so many friends and family members with cancer. We had a dispensary on the other side of the river, and lot of our customers were cancer patients,” Ellis said.

Ellis said some of his friends who are cancer patients have had success using CBD products.

Ellis said have had postive results with ailing pets. “It’s really big in the pet products area. A lot of the animals here are getting older, and CBD really got them up and back outside. We’re getting a lot of feedback that their animals are actually acting normal again,” Ellis said.

“We’ve seen a lot of good results from the Kratom products. Plus, it helps with pain and a broad range of anxiety issues,” Ellis said.

“Kratom and cannabis are two separate things. Kratom is a tree and it grows in Indonesia and Vietnam. It comes in capsules, or a concentrated liquid form, and a powder, you can mix it in juice, chocolate milk and things like that. It’s one of the things we really wanted to get for the store, we thought the glassware for smoking would be a secondary part” Ellis said.

According to the US Food and Drug Administration, Kratom has no FDA-approved uses and Kratom use has been banned in at least six states.

“The government is really leaning toward big pharma companies, but I’m hoping that this all-natural product will become a viable option,” Ellis said.

The recent proliferation of CBD products is due in part, Ellis said, to the industrial growing and processing of the hemp plant, a phenomena that is gaining ground in places like Grass Valley, Fossil and southern Oregon.

“People don’t realize The Dalles is kind of becoming the hemp capital. A company from Kentucky came up and purchased the middle school in Grass Valley, and they moved in an extraction process there for the hemp. Some wheat farmers are transferring over to hemp, and we have huge farms here now. I carry a CBD product that comes out of Fossil,” Ellis said.

A recent law change to the Farm Bill, the Agricultural Improvement Act of 2018, allows hemp production, with a .3 percent maximum level of THC, the main active ingredient found in cannabis. Hemp is a related plant species.

“Hemp is putting more money into the farmer’s pocket than wheat is. It’s a pretty substantial difference. Hemp conditions the soil too, it doesn’t take nutrients out of the soil like wheat and corn,” Ellis explained.

“Our local brand, Simple CBD, is really getting a broad appeal,” Ellis said.

Ellis said that Steamtrain supports 13 local and Northwest glassblower artists that contribute to the extensive array of water pipes and accessories to his shop, including Frye Glass, Noble Glass and Hood River glassblower Craig Graffius.

“We also carry specialty glass jewelry and pendants. Dylan Glass was the first glassblower I had in my shop. He went on to create popular glass straws, that combat the plastic straw issue,” Ellis said.

Patrons to Steamtrain Glass must be 21 years old to purchase smoking-related glass products and CBD products, and you must be 18 to buy incense products.

“Trying to educate the public on all of these issues and the products that are now available for pain management is a huge task, and our society is really lacking that,” Ellis said.  “I hope more people will talk about these products and the information will filter down to the people that need help,” Ellis said.

*The U.S. Food and Drug Administration is warning consumers not to use Mitragyna speciosa, commonly known as kratom, a plant which grows naturally in Thailand, Malaysia, Indonesia, and Papua New Guinea. FDA is concerned that kratom, which affects the same opioid brain receptors as morphine, appears to have properties that expose users to the risks of addiction, abuse, and dependence. FDA-approved uses for kratom. [The FDA is] aware that some firms are marketing CBD products to treat diseases or for other therapeutic uses, and have issued several warning letters. Under the FD&C Act, any product intended to have a therapeutic or medical use, and any product Other than a food that is intended to affect the structure or function of the body of humans or animals, is a drug.