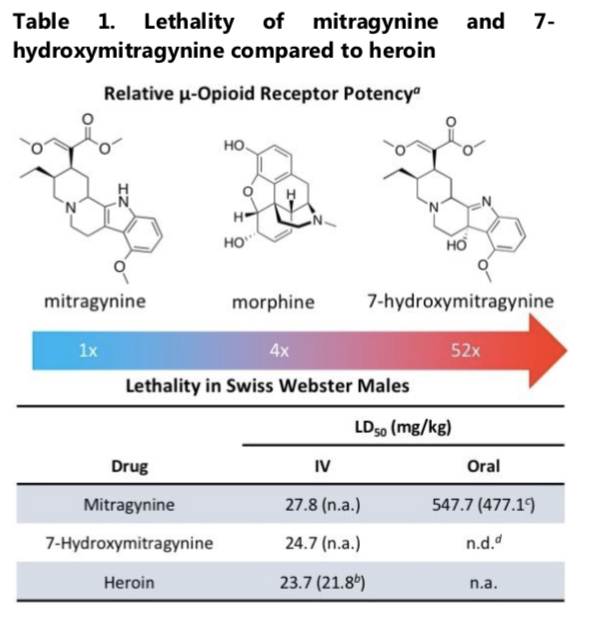 For thousands of people, the opioid-like plant kratom has been life-changing. But like many drugs, it’s not without potential risks. While patient interviews have revealed that kratom can offer some p…

For thousands of people, the opioid-like plant kratom has been life-changing. But like many drugs, it’s not without potential risks. While patient interviews have revealed that kratom can offer some patients with chronic health conditions the relief that conventional opioids hadn’t and in some cases curbed dangerous opioid use, reality isn’t always so neat and clean. New research indicates that high enough doses of the two active molecules in kratom can cause death in mice, suggesting that it is possible to fatally overdose on the substance.

In a paper published October 31 in the journal Chemical Research in Toxicology, a team of researchers tested mitragynine and 7-hydroxymitragynine, the two main active molecules in kratom, on mice to establish their LD50 — a measure of lethal dosage. When researchers injected these chemicals into mice intravenously, they were lethal at around the same dosage as heroin.

“Mitragynine and 7-hydroxymitragynine, the two major alkaloids found in the pharmacologically active plant Kratom appear to have similar potency to each other and to heroin in Swiss Webster mice,” wrote the authors, led by Lauren Smith, a graduate student at The Scripps Research Institute. The team wrote that they found these results surprising, given that other research on kratom has shown a low potential for toxicity.

These doses, fortunately, are out of the typical range of a kratom dosage. For instance, a 2015 study in Drug Design, Development and Therapy gave human subjects oral doses of kratom tea containing between 6.25 and 23 mg of mitragynine. For a person weighing 220 pounds, this translates to between 0.0625 and 0.23 milligrams per kilogram of body weight, over 100 times below the LD50 for mice. Of course, some kratom users push their limits, so it’s entirely possible some users get much higher doses. Nonetheless, there’s minimal evidence that they’re taking it intravenously.

The team also developed a urine test for mitragynine and 7-hydroxymitragynine that works in a similar way to other urine drug tests: by using an antibody to detect traces of drugs. In fact, this was their primary goal with the research, says Kim Janda, Ph.D., a professor of chemistry at Scripps and the corresponding author on the study.

He tells Inverse that the team wanted to develop “a simple diagnostic that could be used by law enforcement or health care professionals to monitor kratom’s use and potential abuse.” And indeed, it’s possible that a rapid lab test could be useful, as doctors and public health professionals are only starting to understand kratom’s impacts on human health.

This study comes at an inconvenient time for those who advocate for kratom to remain accessible. The US Drug Enforcement Administration is expected to rule on whether to make kratom illegal, though the timeframe for that decision is extremely unclear. On Friday, a DEA official told Inverse: “It could be next week, it could be the week thereafter, it could be the next month, it could be sometime next year.” Whatever the case may be, this research does not cast the plant in a flattering light.

Janda and his team weren’t out to demonize kratom, though. While some in the kratom advocacy community will inevitably dismiss this research, Janda emphasizes that the idea that his team is trying to help get the drug banned in the US couldn’t be further from the truth.

“We are trying to present an unbiased assessment of kratom and potentially give insights as why we are seeing more cases of kratom related overdoses,” he says. “Thus, we hypothesize that people are starting to IV kratom versus oral use.”

Earlier this year, the FDA released a report linking kratom to 44 deaths since 2009. The findings were far from conclusive, though, as many cases involved multiple other drugs, and none included full autopsy reports. It’s not clear whether people are actually taking kratom intravenously.

All this is to say that while some kratom users describe it as a miracle drug, it’s still a substance that scientists don’t understand all that well yet. It has other liabilities, too. For instance, a study published in August in the Journal of Psychoactive Drugs showed that people who use kratom regularly can experience psychological withdrawal symptoms.

While researchers are still exploring the potential harms and benefits of the plant-based drug, the case for kratom lies in the hands of federal regulators. And though the timeline is not clear, evidence from the FDA’s public stance on kratom suggests that the outlook is not good.

In the meantime, you can buy kratom from reputable vendors like Left Coast Kratom, both in store and online.