Kratom is an herbal supplement with a cult following, but new research connects its use with vomiting, confusion, and even seizures 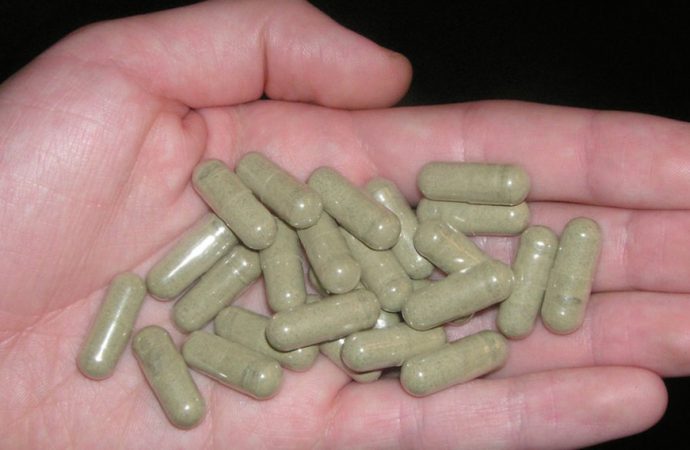 An image of a chain link. It symobilizes a website link url. An envelope. It indicates the ability to send an email. A stylized bird with an open mouth, tweeting. The word “in”. A stylized letter F. …

Kratom, a psychoactive substance derived from a relative of the coffee plant, is a hot trend in the herbal supplement world, marketed to treat everything from addiction to pain to post-traumatic stress disorder.

But kratom’s wide availability and lack of regulation has prompted scrutiny from the medical community — and its use has been linked to serious health issues, according to a new study.

Research published in June in the Pharmacotherapy journal looked at more than 2,000 calls to the National Poison Control Center involving kratom use. Of the 935 calls in which kratom was the only substance involved, the most common symptoms were relatively mild, like agitation and drowsiness. Some people, however, reported vomiting, confusion, and, rarely, seizure, respiratory or cardiac arrest, and, in one case, death.

Read more: A ruling is imminent on the legality of a controversial drug that’s used to treat addiction — but some have called it a ‘dangerous opioid’

Among the calls that involved kratom use and other potential toxins, reports of side effects tended to be more severe on the whole. In some cases, kratom users reported seizures or symptoms of psychosis. In three cases, kratom contributed to a death, though other drugs including alcohol, prescription drugs, and cocaine were also involved.

“What we found was alarming for something that’s widely available as an herbal supplement,” said pharmacist William Eggleston, lead author of the study and clinical assistant professor at Binghamton University School of Pharmacy and Pharmaceutical Sciences.

The study relied on self-reported data and did not not include how much kratom users had taken.

Kratom has long been used as a medicinal and recreational drug

Kratom comes from the Mitragyna speciosa plant, which is native to Southeast Asia, where it has a history of use as a medicinal and recreational drug. The plant contains over 50 chemical compounds that could affect the brain and body, but the specifics are largely unknown.

Research suggests that some of the compounds act on opioid receptors as a stimulant in small amounts, but higher doses reportedly reduce pain and cause a sense of well-being, relaxation or sleepiness, according to the Mayo Clinic.

Sold as an herbal supplement online and in smoke shops, kratom has had its share of controversy before: It has been targeted by the U.S. Food and Drug Administration and linked to potential outbreaks of salmonella. The Drug Enforcement Agency tried to classify it as a Schedule I drug (the strictest level of legal restriction for substances ruled to have no recognized medical use and a high potential for abuse) alongside heroin and LSD, but backed off after an unexpected public outcry.

Advocates have said kratom is unfairly targeted, and that it’s safely used by millions of Americans for relaxation or minor pain relief. Even with the current data, the side effects and deaths from kratom appear to pale in comparison with other drugs, including alcohol, the Washington Post reported on an extensive study of kratom users’ experiences.

Kratom, like all herbal supplements, is largely unregulated, making it difficult to be sure what you’re getting or what the proper dose might be, Eggleston said. “These products do not always contain what is advertised,” he said.

In addition, because of the FDA crackdown, sellers have begun to hedge their bets by labeling products “not for human consumption” and declining to offer instructions for use, further increasing the risk that people could ingest a dangerous amount.

But the main concern, Eggleston said, is that we still don’t know enough about kratom. While the two compounds that affect the opioid receptors do so less dramatically than prescription medications or street drugs, making it likely to be safer than most opioids, there isn’t enough research to support its benefits or even advocates’ claims that its safe to use.

“The risk is twofold — we still don’t know how dangerous it potentially is, and we don’t know how effective it is,” Eggleston said, explaining that kratom is often promoted as a cheap alternative to more expensive or less accessible treatments. “There’s a danger that people using kratom for serious medical conditions may be receiving substandard treatment.”

“We’re not saying no one should use kratom or that it should be banned as a Schedule I drug,” he added. “People looking for treatment options deserve a safe, evidence-based treatment and kratom is not there yet.”

Your multivitamins and brain-boosting pills may be suspect, and regulators are cracking down on the $40 billion industry