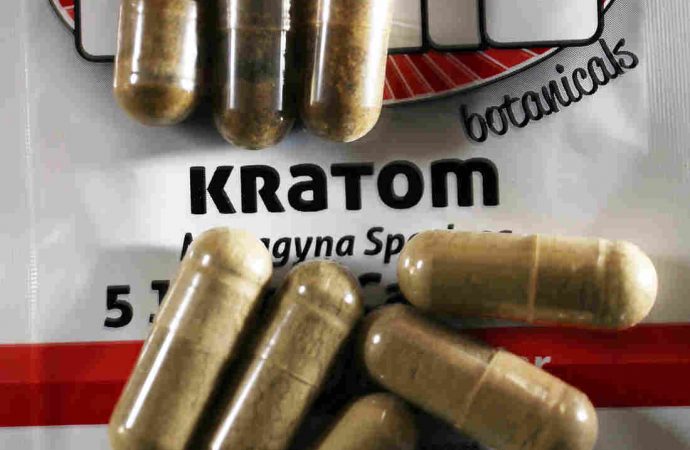 Kratom is made from the leaves of a tree native to Southeast Asia that is a relative of the coffee plant. According to David Kroll, a pharmacologist and medical writer, farmers and indigenous …

The federal government is moving to crack down on kratom, which some people use for chronic pain and to lessen cravings for opioids and alcohol. Joe Raedle/Getty Images hide caption

Kratom is made from the leaves of a tree native to Southeast Asia that is a relative of the coffee plant. According to David Kroll, a pharmacologist and medical writer, farmers and indigenous people have used it for hundreds of years as both a stimulant to increase work output and also at the end of the day as a way to relax.

The leaves are often brewed like a tea, or crushed and mixed with water. In the U.S., kratom has become popular among people coping with chronic pain and others trying to wean themselves off opioids or alcohol.

Karisa Rowland is one of them.

Since 2014, she has woken up every morning, removed a bag of kratom powder from her fridge, put about a teaspoon in a mug and drunk it.

In the past, Rowland, who lives a half-hour south of Fort Worth, Texas, struggled with a serious prescription opioid dependence. After several back surgeries, she was using pills — hydrocodone, fentanyl and oxycodone — to deal with her chronic pain.

One night, in jail after being picked up for a DUI, she hit a low. “I’m looking around and I’m watching raw [sewage] flow through a vent in the floor and I’m thinking, ‘Wow. This has to stop. I’m going to end up dead,’ ” she says.

Today, though, she has no kratom.

In late August, the Drug Enforcement Administration announced its intent to classify kratom in the same category as heroin and LSD by the end of September. Since then, the place Rowland orders from online has been sold out. Rowland says she’s in pain and she is angry. She has plenty of company.

In a YouTube video, a veteran shakes a bottle he says contains prescription opioids he has been given for pain. “This,” he says, “is not Schedule I.”

“Do I seem angry?” he continues, “Yes. Because you’re taking away a right that I fought for. When I did my tour in Iraq, I fought for my right to be in America and be able to help myself, to cure myself. I’m not talking about snorting cocaine, shooting up heroin, I’m not even talking about puffing a joint. I’m talking about brewing some tea leaves, having a sip and feeling better.”

In another video, comedian Trae Crowder says, “This would be like us banning pole vaulting because of concussions.” (Please note, the video contains prolific and inspired cursing.)

People have uploaded hundreds of videos talking about why they drink or swallow kratom pills — veterans coping with PTSD, recovering alcoholics, people with fibromyalgia. A petition on WhiteHouse.gov to keep it legal has more than 118,000 signatures.

Even the Drug Enforcement Administration has been hammered with calls, says special agent Melvin Patterson. “The response has been unexpected,” he says. “People calling us in opposition of our plan to temporarily schedule kratom as a Schedule I, due to it not having a medicinal use.”

Patterson says the move to schedule kratom come out of a concern for public safety. Between January 2010 and December 2015, U.S. poison control centers received 660 calls related to kratom, he says.

In Texas, there have only been 17 kratom calls so far this year, but Kristina Domanski, with the North Texas Poison Center, says the numbers are creeping up.

The DEA attributed 15 deaths to kratom between 2014 and 2016. Critics call it a legal heroin, ripe for abuse and addiction.

The science behind kratom is still evolving.

Pharmacologist Kroll says it is going overboard to classify this plant as a dangerous drug. “Kratom being lumped in with other opioids is both unfair and unscientific,” he says. “It glosses over the subtleties of how the main chemical in kratom actually works.”

The main chemical is mitragynine. It binds to some of the same receptors as opioids, providing some pain relief and feelings of euphoria, but, Kroll says, not the same high. And the chemical doesn’t cause the same, sometimes deadly, side effects as opioids, such as respiratory depression.

“It turns out mitragynine has a very low risk of respiratory depression,” Kroll says. “It also appears that it’s very difficult to at least get animals, get mice addicted to ‘mitra’ — either with the herb or with the pure chemical.”

So what about the people who died? Fourteen of the 15 people also had other drugs or illegal substances in their systems. Advocates for keeping kratom legal also point out that opioid abuse kills tens of thousands of people every year.

Kroll worries an outright kratom ban could push people back to opioids or alcohol. And, he says, it would delay scientists’ researching the alleged risks of kratom and anecdotal benefits of the herb.

Kratom user Rowland is trying to get her friends and kratom users to speak out along with her. She has already sent a letter to Texas Sens. John Cornyn and Ted Cruz seeking support.

Rowland says if drinking kratom means becoming a criminal, so be it.

This story is part of a reporting partnership with NPR, local member stations and Kaiser Health News.