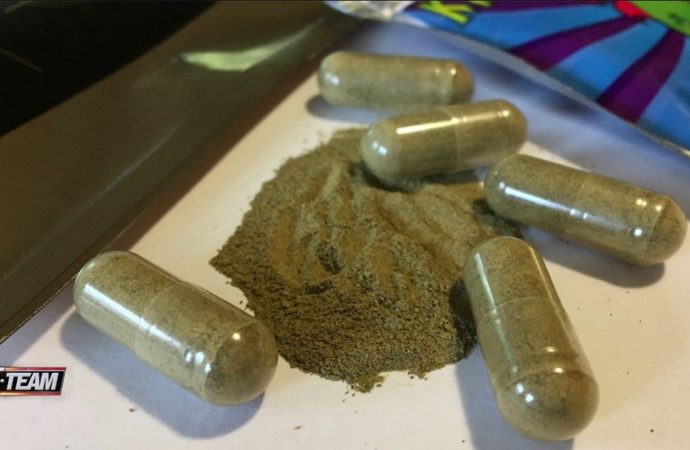 Richie Nelson’s parents say they had never heard of kratom until a package of the herbal pills was discovered in their son’s car after his death. Had they not been discovered, they might never have …

JACKSONVILLE, Fla. – An Arlington couple reached out to the I-TEAM worried about a popular herb marketed as a natural pain killer — one that is available over-the-counter.

Richie Nelson’s parents say they had never heard of kratom until a package of the herbal pills was discovered in their son’s car after his death. Had they not been discovered, they might never have known what killed their 25-year-old son.

Richie died suddenly in February and the medical examiner listed his cause of death as undetermined. No illegal drugs or alcohol were discovered in his blood. But Richie’s younger brother found the kratom package and took it to the medical examiner. A new test revealed a lethal dose of the herb in Richie’s body — confirming the 25-year-old died of kratom poisoning.

Kratom is a tropical tree native to Southeast Asia. Consumption of its leaves can cause increased alertness and energy. It is frequently taken to help alleviate pain, depression, anxiety and the symptoms of opioid withdrawal.

Kratom leaves are dried or powdered and sold in the form of a tablet, capsule or extract. It can also be ingested as a tea or the leaf may be chewed. We found it readily available for sale, over-the-counter, at several Duval county smoke shops and stores.

Richie Nelson’s parents said their son excelled at everything.

“He was a second-degree black belt in Taekwondo. He ran cross-country in high school, was an Eagle Scout and loved to play chess,” explained Rita Nelson, Richie’s mother.

He graduated with an engineering degree from Georgia Tech University.

“He was under a lot of pressure at his job. He was working until three in the morning, meeting deadlines,” Rita explained.

Rita and Richard Nelson believe their son may have been taking the herb to help stay awake and relieve some of the work stress he was feeling.

“I don’t think he thought it would hurt him, I know he didn’t,” said Richard, who tearfully explained the package of kratom that was discovered in his son’s car.

“When you see that package, the price of it is right over the warnings, so he accidentally killed himself for $29.99,” he said. “He had four times the legal dose in his system.”

The FDA lists kratom as a drug, linked to the death of 44 people. The number of calls to the National Poison Control Hotline about kratom have jumped more than 60% in the last year, according data provided to the I-TEAM from the American Association of Poison Control Centers.

In Florida, the number of calls has increased by more than 50% since 2016. Anyone 18 years or older can legally purchase kratom.

Dr. John Muenz is an addiction medicine specialist with Coastal Spine and Pain.

“In my opinion, it (kratom) needs to be regulated,” he said. “We don’t know anything about this drug. It is a drug of abuse and it has the potential for killing people, particularly, when it is mixed with other substances.”

Muenz said kratom has addictive qualities, which make it dangerous. Since it is not regulated by the Food and Drug Administration, he said there is no way of knowing for certain how much kratom is contained in one capsule, one package or one batch being sold in local stores.

He also pointed out that so little is known about the herb, experts are uncertain if kratom builds up over time in the body — which could explain high levels found in someone’s blood stream, like Richie Nelson.

Muenz said he’s concerned that no one is aware of the potentially life-threatening side effects, comparing awareness about kratom to vaping.

“When we’re talking about vaping being dangerous and potentially lethal for individuals, we have a drug here that is readily available, coincidentally in the same places, that can cause the same amount of deaths as a product we are inhaling,” he said. “And, no one knows about it.”

Kratom is legally banned in Tennessee, Wisconsin, Vermont, Arkansas, Alabama and the District of Columbia. These states classify it as a schedule 1 substance. It is also prohibited in Sarasota county in Florida, San Diego County in California and Denver, Colorado.

In November 2017, FDA’s Commissioner, Scott Gottlieb, issued a public health advisory related to, “the agency’s mounting concerns regarding risks associated with the use of Kratom.”

In a statement released, November 14, 2017, the FDA said, “evidence shows that kratom has similar effects to narcotics like opioids, and carries similar risks of abuse, addiction and in some cases, death.”

Additionally, the FDA wrote it is “very troubling that patients believe they can use kratom to treat opioid withdrawal systems” and that “there is no reliable evidence to support the use as a treatment for opioid use disorder.”

Despite this warning, it is legal. In order for kratom to be outright banned, it must be listed by the DEA as a schedule 1 substance. The I-TEAM contacted the DEA asking if that will happen — considering the number of deaths related to the botanical substance.

We learned that the DEA actually began the process of banning kratom in 2016 — three years ago — but halted its part of that process when it received thousands of comments from the public in support of kratom.

Since then, the FDA and Department of Health and Human Services, or HHS, have made a recommendation to the DEA, which is required before a permanent ban can be initiated.

According to STAT, a media company that focuses on health, medicine and scientific discovery, that recommendation was accidentally made public. It reports FDA/HHS believe two ingredients in kratom should be banned or labeled a schedule 1 substance.

Even though the DEA has had the recommendation for two years, it has still not ruled. A spokesperson told me, the decision is still in “internal deliberation, a process that can take months, if not years”.

In a request made by the I-TEAM last week, we asked the DEA how many times the agency has taken two years or longer to make a ruling after receiving a recommendation from FDA/HHS. We have still not heard back.

According to the American Kratom Association, nearly 5 million Americans safely use kratom as a part of their health and well-being regimen. It states on its website, people who use it, do so for the same reasons as people who use dietary ingredients, supplements, and drink coffee, tea, or other caffeinated beverages.

The association insists the FDA is “demonizing” a safe botanical by “misstating the science, ignoring kratom’s long history of safe use and falsely claiming kratom has the same effects as classic opioids.”

Since Kratom remains legal, medical examiners do not test for it during autopsies. For that reason, the Nelson’s believe many more people could have died from it — but no one knows.

They told the I-TEAM that they believe it should be banned, and the public needs to know about the risks.