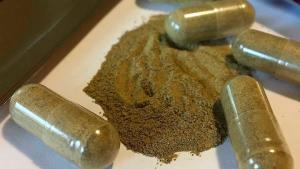 She said she had been taking four pills a day until around Thanksgiving, when she noticed her eyes were turning yellow and she had abdominal pains.


© FoxNews.com Kratom debate: Bans across the nation stir discussion of dangers and benefit

Emily Goss said that in the weeks leading up to Thanksgiving, she had each day been taking about four pills containing an herbal supplement meant to support hormonal balance, weight management and fertility.

But when she started noticing the whites of her eyes turning yellow, and some abdominal pains and fatigue, she stopped. Within weeks, she was rushed to Methodist Hospital in Dallas, where she was placed on the liver transplant list, which saw her receive a new organ on Christmas Day, NBC DFW reported.

“I have my life because someone gave me their liver and I’m just so thankful,” she told the news station.

Goss’ doctor, Jeffrey Weinstein, who is medical director of Liver Transplantation and Hepatobiliary Services at the hospital, said that while the herbal supplements may be marketed as healthy additions to a diet, they are often unregulated by the FDA.

Goss’ case is not the first documented instance of supplements causing damage to the liver and other internal organs. While doctors believe a biopsy of her liver may reveal which ingredient caused so much damage, it is estimated that herbal and dietary supplements-induced liver injury now accounts for 20 percent of cases of hepatotoxicity in the U.S.

“Currently, however, the majority of HDS-associated liver injuries are due to multi-ingredient nutritional supplements, and the component responsible for the toxicity is usually unknown or can only be suspected,” according to a 2016 study published in the U.S. National Library of Medicine National Institutes of Health.

Health professionals have called for more regulation in the supplement industry, as well as more oversight and safety measures.

It was not clear how long Goss had been taking the supplements before she noticed her symptoms.