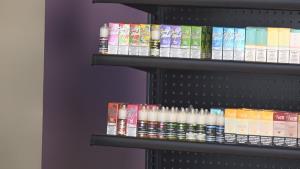 Lots of local small business owners believe the federal government might force them Wednesday to close. Wednesday is the deadline for companies to submit premarket tobacco product applications (PMTAs) …

Lots of local small business owners believe the federal government might force them Wednesday to close.

Wednesday is the deadline for companies to submit premarket tobacco product applications (PMTAs). Advocates for the vaping industry have called on President Donald Trump and FDA Commissioner Stephen Hahn to modify or cancel the PMTA process, fearing it would cause the end of vaping.

Patrick “Brain” Aguirre is among the owners of vape shops who are concerned about Wednesday’s deadline. Part of his worry stems from the fact that he opened Brain’s Smoke and Vape on July 1.

“It’s awesome,” he said of his first two months in operation. “Because we’ve been one of the businesses that’s actually been able to open during a pandemic, and we’ve been thriving. Things have been going really good.”

He fears that the regulation imposed by the PMTA will wipe out not just him, but the vaping industry as a whole. “If this law takes effect, then it’s going to kill about 99 percent of all business,” he claimed.

The FDA requires PMTAs be submitted by any company that makes a tobacco product that was brought to market after February 2007. That includes vaping liquids, and nearly all vape shops get a large piece of their revenue from selling flavors they make themselves.

“We employ about 20-25 people,” said Roy Hufstetler, who owns five vape shops in East Texas. “And if the PMTAs do go through (Wednesday)—as I’m afraid it will—then it’s pretty much going to shut us down.”

Those in the industry say they are less concerned about the stringency of the application process than its cost. The FDA states on its website that applications will likely cost between $117,000-466,000, which most small businesses do not have to spare.

Most vape shop owners are nervous about tomorrow’s product registration deadline. If the @US_FDA does not change course, the high price of an application could force thousands of small businesses that make their own e-liquids to close. pic.twitter.com/qYfA8631Nn

“This allows big tobacco to come in,” Hufstetler explained. “Who already has e-liquids, and who already have e-liquid devices—vaping devices—and it’s gonna allow them to come in and monopolize the market.”

Because of a federal ban on flavored, prepackaged e-liquids like those sold by Juul, Blu, and R.J. Reynolds, Aguirre said all that would be left would be either tobacco- or menthol-flavored.

“Which is going to kill a lot of the business,” he added. “Just because people are wanting to get away from the taste of cigarettes. So, it makes no sense to force those flavors on people.”

While scientists examine and debate the long-term health impacts of vaping, studies have shown it to be an effective way to quit smoking.

“If the law does pass, it’s gonna force a lot of people back to just smoking cigarettes,” Aguirre predicted. “Which is an unsafe, unclean option.”

“Most of us got into the business to help people–help people get off cigarettes,” Hufstetler added. “Because, those of us who were smokers—I was a smoker for 35 years—I haven’t touched a cigarette in seven years because of vaping. So, it helped me. I honestly believe that it helps other people.”

Industry leaders say there are 14,000 vape shops nationwide with 150,000 employees and 13 million customers. Aguirre sells CBD and Kratom products, as well, but says they make up too small a percentage of his sales to sustain the business if he loses the ability to sell flavored e-liquids.

“You know, all hopes and prayers that this (PMTA) thing does not pass,” he said. “Because if it does, it’s not only going to crush my business, but it’s going to put millions of people out of business, all throughout the country.”