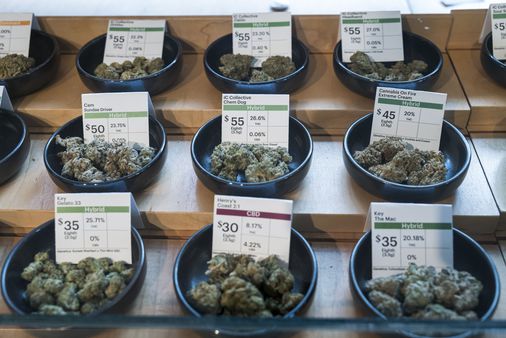 Federal regulators looking into pain management options at the Centers for Disease Control and Prevention have received hundreds of comments related to medical marijuana and more than 1,000 about …

“Through this opportunity, CDC is seeking stakeholders’ perspectives on and experiences with pain and pain management, including, but not limited to, the benefits and harms of opioid use,” it said. “CDC invites input specifically on topics focused on using or prescribing opioid pain medications, non-opioid medications, or non-pharmacological treatments (e.g., exercise therapy or cognitive behavioral therapy).”

While the notice published in the Federal Register does not explicitly reference cannabis or kratom, numerous individuals have taken the opportunity to submit their feedback on the therapeutic benefits of the substances as alternatives to prescription opioids in their pain management.

More than 200 people wrote about either “marijuana” or “cannabis,” about 70 wrote about CBD, and more than 1,000 discussed kratom, a lesser-known herb that has also shown promise as a pain reliever. There were a total of 3,682 comments submitted as of Monday afternoon. The deadline to submit comments is 11:59 p.m. on Tuesday.

“I suffer from rheumatoid arthritis and have had 15 skin cancer removals and didn’t receive pain meds for any of those surgeries! I wouldn’t have made it without cannabis,” an anonymous commenter wrote. ” I never have any side effects nor does it slow me down. It actually helps ease the pain which enables me to do more physical activities! It’s much safer than alcohol and I don’t understand why the U.S. hasn’t legalized other than politics!”

Another person with chronic pain from a compression fracture wrote, “I use cannabis to relieve nerve and muscle pain. Cannabis relieves my pain effectively and doesn’t cause me as much impairment as opioids and other medication I was prescribed for the injury.”

A 65-year-old man who said he suffers from multiple muscular and skeletal birth defects described negative side effects from the opioid-based painkillers he was prescribed and said that he’s since reduced his dosage after incorporating cannabis into his regimen.

“Upon having daily regular doses of marijuana I was able to substantially reduce the oxycodone dosage,” he said. “There was a period where I stopped using oxycodone completely. Now, I use marijuana daily in conjunction with low 2.5mg doses (20mg/day) oxycodone. I realized the pain control was due to the combination of marijuana and opiate as soon as I began using marijuana regularly.”

Paul Armentano, deputy director of NORML, said an “estimated one in ten Americans suffers from chronic pain conditions that are unresponsive to conventional pain treatments, such as NSAIDS and opioids.”

“Because of this unmet need, and because many conventional analgesics possess the risk of serious adverse side-effects, including overdose death, it is understandable that many patients are seeking alternative treatment regiments, such as cannabis,” he said. “It is notable that the US Centers for Disease Control is seeking personal feedback from these patients and is looking to learn from their experiences.”

“The CDC’s call for public comments is a unique opportunity for this agency to hear directly from these tens of thousands of patients who are therapeutically benefiting from cannabis, and in many cases, substituting it in place of more dangerous opioids,” he added. “Ideally, this feedback will help guide the agency in amending and evolving their public health and pain management guidelines to better recognize the important role that cannabis can play as a relatively safe and effective analgesic for many chronic pain sufferers.”

A recent meta-analysis found that, on average, pain patients who use cannabis reported a 64 to 75 percent reduction in opioid dosages.

Another study released in April found that marijuana can mitigate symptoms of opioid withdrawal.

CDC’s comment period on pain management has so far received nearly three times as many as a recent Drug Enforcement Administration notice on increasing marijuana manufacturing for research purposes.

It’s received slightly fewer compared to when the US Department of Agriculture opened a comment period for proposed regulations on hemp last year. The period saw more than 4,600 comments.

Read the story on Marijuana Moment.