As some states ban kratom, Michigan considers regulating it 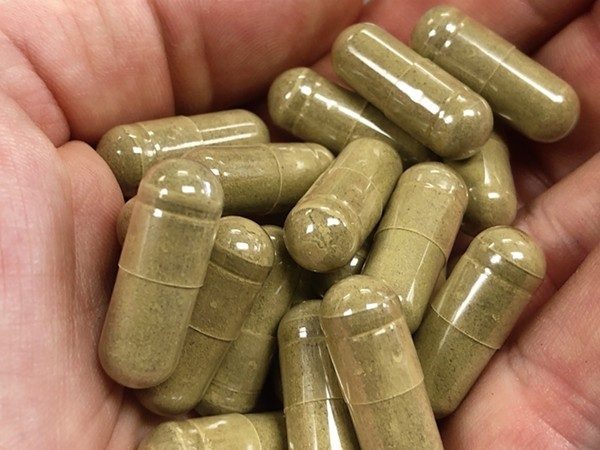 Last year, the FDA announced a recall of some kratom products linked to a Salmonella outbreak that sickened 199 people in 41 states. In Michigan, the FDA documented four cases. Since the purported …

The car crash was just the beginning of Trish Richards’ nightmare.

To cope with a broken collarbone and fractured ribs, the 37-year-old graphic artist was prescribed highly addictive opioids in October 2017.

“I was depressed, I couldn’t sleep, I never felt anything like it,” she tells Metro Times. “I started buying Oxies, Vicodin, Percocet, whatever I could find” from street dealers.

Some of the pills were fake, and she suspects others were laced with the deadly opioid fentanyl, which claimed more than 1,300 lives in Michigan in 2017, according to the U.S. Centers for Disease Control and Prevention.

Then in March, a friend told her about kratom, an herbal supplement that is legal in Michigan and increasingly available online and at gas stations and head shops. It’s available in powder for tea, capsules, and liquid concentrates.

“It was a miracle,” Richards says. “It helped with my pain and withdrawal. I haven’t taken a painkiller since.”

Richards is among several million Americans who are believed to be using kratom, which proponents say curbs opioid addiction; relieves pain, depression, and anxiety; and elevates mood and concentration. Early-stage research and anecdotal evidence from kratom advocates suggest the herbal drug is an effective alternative to opioids, which killed nearly 47,000 people nationwide and 2,033 in Michigan 2017, according to the CDC.

But health officials warn that kratom, which is unregulated, can be dangerous and addictive. The U.S. Food and Drug Administration has taken a zero-tolerance approach, advising the public to avoid consuming kratom.

Six states and Washington, D.C., have banned kratom. In 2014, Michigan lawmakers introduced a bill in the state House to ban the herb, but the legislation eventually died. The U.S. Drug Enforcement Administration planned to ban kratom in late 2016 but backed off in response to backlash from physicians, scientists, and members of Congress.

Now Michigan is among at least nine states considering regulating the substance under the “Kratom Consumer Protection Act,” which would require companies to test the product and list the ingredients and directions on the label. The act has been approved in Utah, Nevada, Georgia, and Arizona.

“This is something the administration is looking into,” Tiffany Brown, spokeswoman for Gov. Gretchen Whitmer, tells the Metro Times.

Brown referred additional questions about kratom to the Michigan Department of Health and Human Services, which could not be immediately reached for comment.

Kratom is derived from the leaves of trees in Southeast Asia, where it has been used for centuries as a stimulant and pain reliever. In the past five years, kratom has become increasingly popular in the U.S., where it’s sold as pills, powder for tea, or a liquid concentrate.

The herb is a psychoactive substance that can produce effects similar to opiates. Users describe a variety of effects, from mild euphoria to relaxation.

At Detroit Smoke and Vape, one of the largest kratom retailers in Michigan, various forms of the product fill an entire wall. About a quarter of the store’s customers buy kratom, manager Victor Dabish says.

“We’ve never had a complaint about our kratom because we rely on trustworthy brands,” Dabish tells the Metro Times. “We hear a lot of positive feedback.”

The safety of kratom is the subject of much debate.

A paper published in the International Journal of Drug Policy in May offered anecdotal and pre-clinical evidence that “strongly” suggests kratom may be an effective pain reliever and a tool to alleviate opioid addiction.

Researchers at Johns Hopkins and the University of Rochester Medical Center have also cited preliminary evidence that suggests kratom is an effective substitute for opioids.

An advocacy group called the American Kratom Association is urging states to stop banning the herb, in large part because of its potential to alleviate withdrawal symptoms and serve as a safer alternative to opioids.

But without complete clinical trials, the FDA is warning the public to avoid kratom altogether.

“There have been no adequate and well-controlled scientific studies involving the use of kratom as a treatment for opioid use withdrawal or other disease in humans,” FDA Commissioner Scott Gottlieb said in a statement last year.

In April, the CDC reported 91 fatal overdoses involving kratom over an 18-month period. But in most of the deaths, other drugs were present, making it difficult to determine kratom’s role, if any, in the overdoses, the CDC acknowledged.

“Clearly, if kratom is adulterated with substances like fentanyl, heroin, benzodiazepines, cocaine, and other prescription opioids as set forth in the CDC report, adulteration can lead to overdose deaths,” the American Kratom Association wrote in response. Last year, the FDA announced a recall of some kratom products linked to a Salmonella outbreak that sickened 199 people in 41 states. In Michigan, the FDA documented four cases.

Since the purported benefits of kratom have not been verified by clinical trials, the FDA bars kratom companies from making health claims on their labels.

In May, a 36-year-old Royal Oak man was sentenced to two years in prison after importing kratom, repackaging it, and selling it as a treatment for opioid addiction and other medical conditions.

“We will not tolerate the importation or misbranding of drugs and other products without proper regulatory approvals,” Assistant U.S. Attorney General Jody Hunt said in a statement. “The Department of Justice will continue to work with the FDA to ensure that drug distributors do not put consumers at risk by circumventing their obligations under the Food, Drug, and Cosmetic Act.”

When the DEA published a “notice of intent” to ban kratom in August 2016, the federal agency was met with a firestorm of criticism from Congress, physicians, scientists, and kratom advocates. The DEA’s plan was to add kratom to the Schedule I list of controlled substances, which includes heroin and LSD.

Opponents of the plan warned that a ban would quash future research on an herb that has the potential to play a vital role in the war against opioids. They also said some kratom users would go back to opioids or rely on an unregulated black market.

“Placing it into Schedule I, thus banning it, risks creating public health problems that do not presently exist,” researchers wrote in a report published by Psychopharmacology. “Furthermore, appropriate regulation by (the) FDA is vital to ensure appropriate and safe use.”

Also objecting to a ban, more than 50 members of Congress, including Michigan-based Reps. Justin Amash, John Conyers, and Dan Benishek, urged a delay to “provide ample time for public comment.” Eleven U.S. senators followed up a few days later, also asking for a delay “given the long reported history of kratom use, coupled with the public sentiments that it is a safe alternative to prescription opioids.

After a rash of bans, states are beginning to strike a balance between safety and access by regulating kratom. In June, Nevada became the fourth state to approve the “Kratom Consumer Protection Act,” which requires testing and truth in labeling.

In November, the act was introduced to the Michigan Senate, where it’s awaiting a hearing in the Committee on Agriculture. Michigan is one of a dozen states being lobbied by the American Kratom Association.

Under the bill, kratom companies would be required to test for purity and quality. Those results, along with every ingredient, would have to be listed on the label. Violating these requirements would be a misdemeanor punishable by up to 90 days in jail.

The bill would also ban sales to people younger than 18.

If passed, the Michigan Department of Agriculture and Rural Development would oversee and enforce the regulations.

Stay on top of Detroit news and views. Sign up for our weekly issue newsletter delivered each Wednesday.