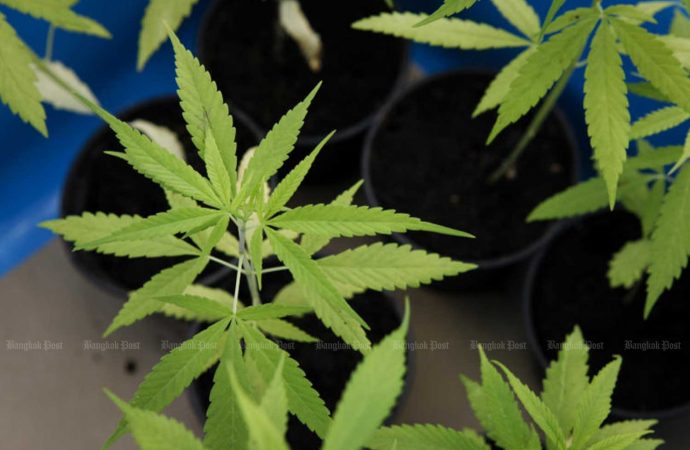 The medical use of kratom could also reduce imports of medical products since alkaloid and mitragynine in the plant has a potency equal to 17 times that of morphine, he said. Several countries such as …

Public Health Minister Anutin Charnvirakul and Justice Minister Somsak Thepsutin have inked two agreements to push for the removal of kratom and marijuana from the narcotics list as a New Year’s gift for the people.

Mr Anutin, also deputy prime minister, and Mr Somsak on Friday signed two memoranda of understanding on the procedures to remove kratom and marijuana from the narcotics list.

Mr Anutin said the two plants were listed as Category 5 drugs, but they had many medical properties.

The possession, planting, use and trade of plants or substances on the list are illegal.

In several countries, kratom is not on the narcotics list, nor is it on the United Nations Convention on Narcotic Drugs. This made it easier to remove kratom from the narcotics list than delisting marijuana, said the public health minister.

Growing marijuana for medical use would promote Thai traditional medicine wisdom and allow farmers who grow or process it to earn more incomes. Authorities had to control the planting areas of marijuana to avoid potential effects on society, said Mr Anutin.

The Public Health Ministry already forwarded a draft bill on marijuana use for medical purposes to the House of Representatives for consideration. Amendments were also made to make hemp plants available freely for medical use, said the minister.

After the Justice Ministry supported the removal of kratom from the narcotics list, many people will benefit from its medical properties. Like all medicines or food supplements, kratom has both beneficial and harmful effects on health, he said.

“When the draft bill on marijuana use was forwarded to the House, I wondered how I could make other coalition parties understand the objective of marijuana use for medical purposes. Bhumjaithai [his party] has kept pushing for this issue and this enabled doctors to prescribe marijuana-based medicines to patients. Several public hospitals have opened medical marijuana clinics. On Jan 6, the Department of Thai Traditional and Alternative Medicine is scheduled to open a central clinic to prescribe medical marijuana to patients,’’ said the public health minister.

Mr Somsak said unlike Thailand, most countries did not restrict the use of kratom. If the plant is removed from the narcotics list, it would benefit the country’s economy as kratom had medical properties that could be promoted commercially.

The medical use of kratom could also reduce imports of medical products since alkaloid and mitragynine in the plant has a potency equal to 17 times that of morphine, he said.

Several countries such as the United States, Australia and France produce morphine, with production value of over 500 billion baht a year, he said.

Thailand should urgently conduct research on the medical use of kratom and apply for patents, he said, ciitng as an example Chiba University in Japan, which had already registered three patents on kratom drugs.

He added it took as long as three years to grow the plant before it could be harvested.

“I’ve never opposed the use of marijuana for medical purposes. I secretly back it and wait for the policy to be implemented.

“While working at the Justice Ministry, I see how kratom, if used for economic and medical purposes, can generate huge value. It should be removed from the narcotics list,” he said. “This will be a New Year’s gift from the public health and justice ministries.’’